↓ Skip to Main Content
Home › Communication › The Power of “Bula”

The Power of “Bula”

I traveled to Fiji this past year and was struck by the friendliness of the people. I’d never encountered such upbeat, content and kind folks. For example, I was intrigued by how their simple greeting, “Bula“, meaning “Hello,” to every passing stranger elevated my spirit and mood. I even saw people walking on the side of the road shouting, “Bula” to unknown occupants of passing cars. In turn, I became friendlier and more approachable. It was clear how such a seemingly small interaction among strangers contributed to a friendly, connected, and happy culture. 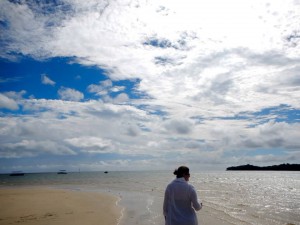 I recently watched a CNN piece on loneliness and was reminded of the impact of “Bula.” Despite our increased connectivity and life in densely populated settings, more people today suffer from profound loneliness. The effect of greeting a stranger with a quick “Hello” can transform this experience for someone…it certainly did for me. I became more accessible, less guarded and defensive, and indeed, a happier person.

So bring the power of “Bula” into your life – lift your spirits while helping lift the spirits of anyone around you. It transforms people and culture!

Share on LinkedinShare on FacebookShare on TwitterShare on PinterestShare on Reddit
Tagged with: bula, connected, culture, Fiji, interaction, travel