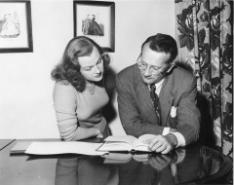 Innovation, Failure, and the Art of Doing Something Badly

In the McKinsey Quarterly’s recent survey “How Companies Approach Innovation,” one of the most—if not the most—often-cited roadblocks to innovation is failure. “…companies discourage talented staff from pursuing innovation by… being risk averse and having no plan for dealing with failure.” Many executives said that “any kind of failure is a significant detriment to career advancement” and a significant number of top mangers said “leaders hinder innovation by maintaining a fear of failure in the organization.” The recent death of the great jazz singer, Jo Stafford, reminded me that failure is not only necessary in innovation, but in rare instances, someone extremely talented can fail right into innovation.

Through the 1940s and the 1950s, Jo Stafford was best known for her rich, warm voice and her laid back, easy, even wistful delivery of jazz standards and big band classics. Stafford was one of a very few jazz vocalists who had classical vocal training, and one of an even smaller number who had “perfect pitch”—the rare ability to identify or find any note without help from an instrument. Yet in the late 1950s, Stafford and her husband, arranger and pianist Paul Weston, recorded a series of albums that were intentionally and deliberately downright awful.

In 1957, Stafford and Weston recorded an album entitled, “Jo Stafford and Paul Weston Present: The Original Piano Artistry of Jonathan Edwards, Vocals by Darlene Edwards.” Stafford and Weston claimed that the Edwards were a New Jersey lounge act that they discovered. Vocalist “Darlene” was consistently at least one-quarter step out of tune; pianist “Jonathan” couldn’t keep time. The album was such a success that they followed up with an album of standards featuring the same level of (non) artistry. This second album was a huge commercial success. In 1961, the “Edwards” recorded a third album, Jonathan and Darlene Edwards in Paris, which won a Grammy Award—for best comedy album! Incidentally, it appears that it was some time (presumably between their first and second album) that Weston and Stafford actually owned up to being “Jonathan” and “Darlene.”

So how does this relate to innovation? Jo Stafford and Paul Weston weren’t afraid of failure. They had spent time and money in the studio recording their album. They had in fact done the Jonathan and Darlene act to entertain close friends at small parties, so they took a calculated risk. Second, they did something “bad” very well. As a musician, I can tell that it takes tremendous skill—and nerve—to perform consistently badly in a way that is consistently funny.

Ultimately, Stafford and Weston did something that had never been done before: musical parody based on performance. Before “Jonathan and Darlene Edwards” there was Florence Foster Jenkins, an operatic wannabe who sang recitals dressed in angel’s wings. But Jenkins took herself very seriously and thought she was a great singer. Stafford and Weston combined skill, art, and took a calculated risk that has kept and will keep thousands entertained for years.

Share on LinkedinShare on FacebookShare on TwitterShare on PinterestShare on Reddit
Tagged with: fear of failure, roadblocks to innovation

One comment on “In Memoriam: Jo Stafford, Jazz Vocalist and Innovator”